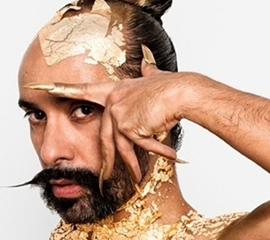 Boy from Russell Turn Couture Designer for the Stars Returns

After leaving New Zealand 23 years ago for the lights of London, can-do eccentric artist Lyall Hakaraia is back this month for Auckland’s Pride festival. The nightclub owner, event director, fashion designer, DJ and Dad will play as DJ Tranny Dad at the official closing party PROUD at Victoria Park after the 2nd Auckland Pride Parade on February 22.

Hailing from Russell, Hakaraia is well-known for his couture designs which have been worn by celebrities such as Beyonce, Jessie J and Lady Gaga and have regularly appeared in Harpers Bazaar, Vogue and Elle. However, Hakaraia only spent one year at Elam College – instead, taking it upon himself to learn the trade and make it to the top in his own way.

“Elam was useful in that it made me decide I didn’t want to be in art school any more. I was there for a year but I realised my vision of how I wanted to do things was completely different to everyone else. The way I worked was different. I’d go out and buy second-hand clothes, 1980s gear then, and paint in them and no one could believe I’d never get a drop of paint on my outfit.

“I taught myself how to sew and pattern cut and I started to work with amazing skilled people who were doing high-end embroidery or corsetry for La Croix and Dior and Mugler. We’d be working all day on a piece then at night get dressed up together and go partying at clubs with the hot celebrities and amazing performers and endless Champagne.”

Though he is now kept busy with a 13 year old daughter and nightclub ‘Vogue Fabrics’ in the basement of his workroom and home, Hakaraia says he will enjoy the trip back to New Zealand. His favourite memory?

“The birdsong of a New Zealand morning. There is not much of a dawn chorus in London.”