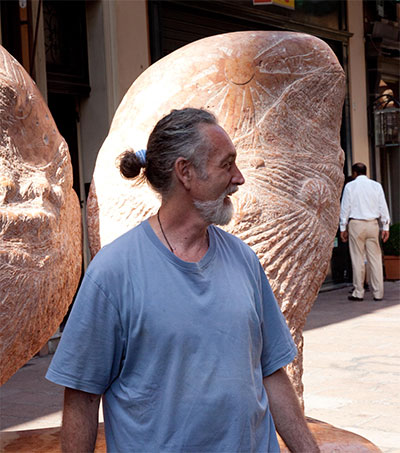 “Sculpture thrives on its rapport with the city,” Lydster said, “and an eco-sustainable environment highlights that relationship.”

“The urban centres, particularly the treeless and plant-less Italian ones are crying out for re-attachment to the natural world,” said Lydster, who has lived and exhibited his work in Bologna and throughout Italy since the early 1980s. “To bring to a specific public site a three-dimensional image of a natural scene, itself attached to the stars, is, I think, a way of opening up a dialogue between the individual and a much greater realm of awareness.”

Various formations of the headscapes have been exhibited in several city squares, including Cortile Palazzo d’Accursio in Bologna and Torri dell’Acqua in Budrio. Another sculpture exhibit, “The White Riders,” is currently on view at Galleria B4 in Bologna.

Over the past decade, Lydster has created a series of “headscapes” exhibits that have drawn critical praise for what the artist calls the “meeting point of art, nature and the mind.”

In the 1970s, Lydster studied theatre at the American Academy of Dramatic Arts in Pasadena, California. In 1978, he enrolled at the Emily Caar School of Art in Vancouver.