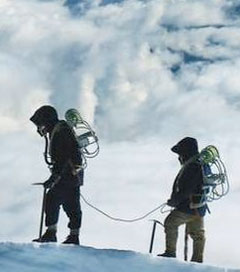 “In 1953, no one even knew if it could be done,” says Auckland-based Leanne Pooley, director of the 3-D documentary Beyond the Edge, which chronicles Sir Edmund Hillary and Sherpa Tenzing Norgay’s historic expedition to the summit of the 8850m-high Mount Everest.

For the first time, the documentary, which premieres at the Toronto International Film Festival this month, combines archival footage taken by the Royal Geographical Society in 1953 with dramatic recreations of the climb, with actors Chad Moffitt and Sonam Sherpa playing Hillary and Norgay.

There is no dialogue; only voiceover interviews with the men who climbed, and those who came after. Hillary’s bony, benign face gives no indication of the roiling turmoil beneath.

Peter Hillary, who is in Toronto for the premiere, remembers how as a boy, he would listen enthralled on the rare occasions his father would tell stories about the climb. “Dad would talk about being in that little tent on the final night with Tenzing, about all their anxieties, the snow conditions, how cold their feet were.”

In the end, what Pooley was capturing was not just a place, but a time.

“I wanted to make a movie about the reasons they did it,” Pooley says. “It was a very different time. Climbing Everest wasn’t about ticking a box on your list. Back then it was a true adventure and there was the potential for real heroes to emerge.”

Beyond the Edge is in cinemas on 24 October.