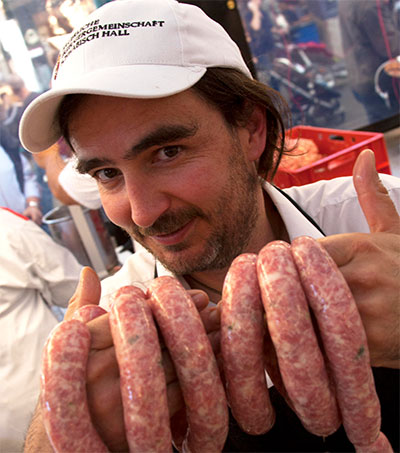 Sausages are the quintessential German food, and that’s why New Zealander Simon Ellery, known as the Sausage Man Who Never Sleeps, moved to Berlin in 2010. Over the past five years, he has studied the art of German sausage making and has become a local celebrity in the Berlin foodie community. Jill Beytin from NPR Berlin has a chat.

Ellery, who is originally from Ashburton, explains the origins of his moniker: “It actually comes from the name of a song I wrote when I was living in London and working in a butcher shop there. One of the other Sausage Men who worked there, he was also a New Zealand guy, my mate Pete. One day I didn’t see him come into work and saw him come down at the end of the day, and I was like Pete, have you gone home yet, and he was like, ‘Mate, a sausage man never sleeps.’”

“If you want to run your own business in specific trades in Germany, you have to become a master at that trade. It’s a three-month course, and it’s full time, like six days a week. It’s all in German, the master title is setting you up to run your own business in Germany, so there’s two sections of it to do with general business stuff that you need, the other half was all meat production and sausage production … making all the weird and wonderful German things that you have to do, that you have to learn about,” Ellery says.

Weird and wonderful is a perfect way to describe the art of German sausage making. There’s a reason German sausages are so famous, and Ellery had to learn all of the unique things that go along with making a perfect German sausage.

He goes on, “It’s very steeped in tradition with how it’s done, and German butchers are very, very precise with stuff and they’re very knowledgeable. There’s a huge range of different products you can buy in Germany and a lot of them have all these different things around them when you’re making them with times and temperatures and parts of meat and when you add this to that its very much an exact science. It’s definitely is an art form here.”