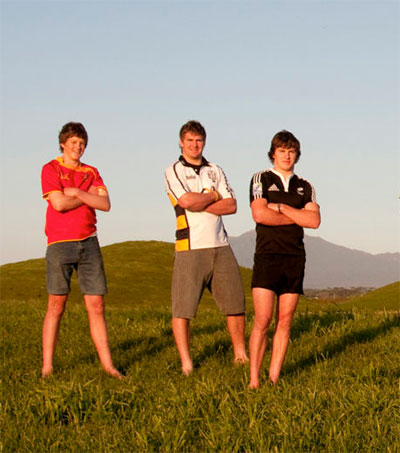 Behind the Scenes of the All Blacks’ First Family

The Barrett brothers have become the first trio of brothers to play together for the world’s most consistently successful sports team, New Zealand’s All Blacks.

Kevin Barrett was a grafter of a back-five forward for Taranaki and briefly the Hurricanes, but his three sons, Beauden, 26, Scott, 23, and Jordie, 20, have outdone him now by striding the international stage, against Samoa in Auckland, with a chance of repeating their unique hat-trick in the British & Irish Lions Test series starting this Saturday.

They are remarkable yet also typical New Zealand “country boys”, who ignored video games and kicked rugby balls around and honed their sidesteps instead, on the “back lawn” of the dairy farm where the Barretts rear 200 cattle on the coastal plains of Taranaki.

Kevin, nicknamed “Smiley”, and his wife Robyn spoke affectionately of Beauden’s rise in a recent Sky TV documentary Beneath the Black.

“There’s an enormous amount of old ladies getting pleasure out of watching ‘Beaudy’ play,” Robyn said, “because they’ll have played bowls with his nana’s auntie’s cousin.”