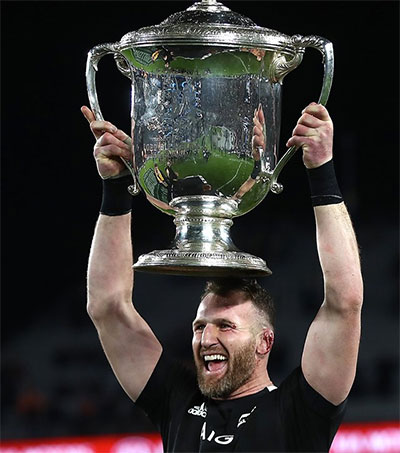 “New Zealand secured the 2019 Bledisloe Cup with a resounding 36-0 victory against Australia at Eden Park to dent any hopes of a Wallabies resurgence ahead of next month’s Rugby World Cup,” Australian Associated Press correspondent Oliver Trenchard writes in a story published by The Guardian.

“The scoreline was a far cry from the record 47 points the Wallabies put past the All Blacks last weekend in Perth. They were shut out by the hosts for the first time since 2012, with the question marks that arose around Steve Hansen’s side following [the previous week’s] performance all but answered,” Trenchard writes.

“The Wallabies were punished for their mistakes by the notoriously ruthless All Blacks, with the playmaking duo of Richie Mo’unga and Beauden Barrett displaying arguably their best performance to date in their new roles within the back-line, while recalled wingers George Bridge and Sevu Reece both capping fine individual performances with a try apiece.

“It was the All Blacks pack, though, that secured the platform at the breakdown for the duo to do what they do best, forcing the Wallabies to kick and consequently allowing the hosts to counter. Kieran Read was back to his best, silencing any critics from previous weeks as he orchestrated the forwards while battering the Australia defence.”

The All Blacks begin their 2019 Rugby World Cup campaign with a match against the Springboks on 21 September at Kanagawa Yokohama Stadium.