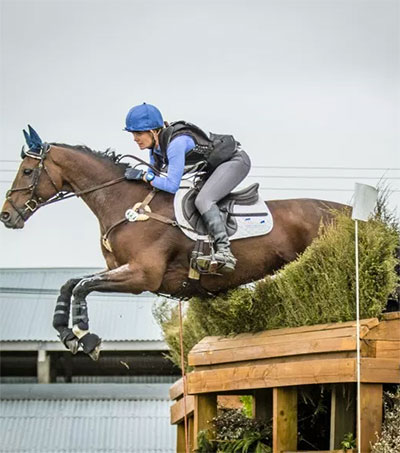 Twenty-six-year-old New Zealander Virginia (Ginny) Thompson is having to pinch herself that she is in the UK ready to compete at her first ever Mitsubishi Motors Badminton Horse Trials, which get underway on 2 May.

“I’m trying not to think about it too much at the moment, but I’m so excited,” Thompson says. “The first time I hacked my horse here, it was totally surreal – I couldn’t believe I was riding her in the UK and I honestly believe I am living the dream.”

The horse Thompson is referring to is 14-year-old mare, Star Nouveau, or Paige as she is known at home. They have been together for the past six years and have moved up from one-star, culminating in eighth place in the four-star at Adelaide last November.

Thompson has done small stints in the UK before, working for Pippa Funnell for a couple of months and Mark Todd for a month on two separate occasions a few years ago, but this time she is here for the next two years. She moved into Blyth Tait’s Gloucestershire base on 12 April, and her boyfriend, a former dairy farmer, is on his way over to join her. Paige is currently her only horse.

“I’m here for a while to learn. We’ve done everything we can in the Southern Hemisphere,” Thompson, who had a yard of around 10 horses back at home, says. “I’ve sold everything and now I’m here to re-group and re-start – it’s exciting but pretty daunting too. Blyth is fabulous – so generous and full of advice.”