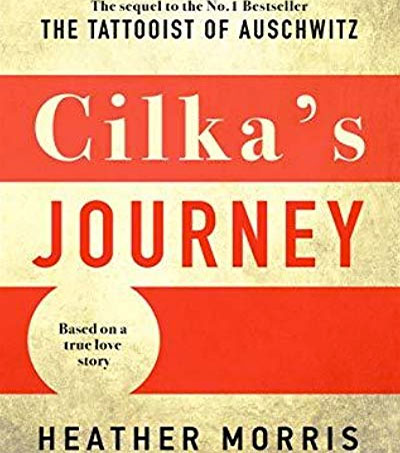 After delivering one of last year’s biggest bestsellers with The Tattooist of Auschwitz, Te Awamutu-raised Heather Morris is ready to reveal Cilka’s Journey as a follow-up.

Morris recreated the experiences of Lale Sokolov, a Slovakian Jew who survived the Holocaust as a prisoner and served as an Auschwitz-Birkenau tattooist, after meeting him and hearing his life story. The Tattooist of Auschwitz remains a huge hit more than six months after its American release, and now Morris is exploring the world of another character from that novel: Cilka, who was only 16 when she was taken to Auschwitz-Birkenau in 1942, and whose beauty both saved her life and condemned her to being the concubine of the camp commandant. Once again based on real events, Cilka’s Journey heartbreakingly traces how she was charged as a collaborator and sentenced to hard labour in a Siberian gulag.

Morris talks with Entertainment Weekly. In addition, EW caught up with the author on what inspired her to write this book, what kind of research she did, and how the phenomenon of Tattooist is sitting with her.

Morris tells EW she engaged a professional researcher in Moscow to provide her with the factual details of the camp Cilka spent 10 years in, the work she would have done, both in actuality and created by herself.

“I read many testimonies of other women who spent time in the same gulag as Cilka,” Morris explains. “There were times I was weighed down and emotionally drained when reading of the circumstances Cilka would have experienced and endured. I travelled to Bratislava and Kosice in Slovakia to meet people who had known Cilka and her husband for many years. I heard their stories of Cilka’s life after the gulag and was uplifted to learn of the happy life she had with the man she loved.”

The magazine asks Morris how she feels about the success of Tattooist.

“At times uncomfortably,” Morris says, “unable to comprehend the success of my debut novel. Always humbled particularly when I meet people who wish to know more about Lale, and the many who write to me sharing their stories of pain and the hope and love they have received by reading about Lale and Gita. Delighted that so many people ask, ‘What happened to Cilka? I need to know.’

“I don’t over-analyse why The Tattooist of Auschwitz has resonated with so many people, in so many countries, other than the need to hear a simple story about an ordinary man and woman, living in an extraordinary time who never gave up hope, loved and survived.”

Morris moved to Melbourne in the 1970s.