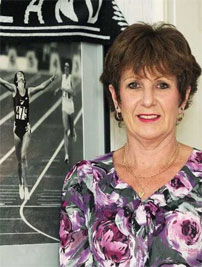 Thirty years ago this month Auckland-born Olympic middle and long distance athlete Anne Audain accepted $1, for winning a 15km race in Oregon, launching a lucrative road-racing career while forever changing the sport of running. Audain was banned from international competition for openly challenging the sport’s amateur rules. But in 1982 in Auckland, Audain set the world record in the 5m, a record the IAAF refused to certify until later that year after she had her eligibility reinstated for the Commonwealth Games in Australia. With a sanctioned trust fund to pay her expenses, Audain’s path was cleared for a professional running career. She did herself proud, winning 75 races and finishing in the top three 9 per cent of the time. Audain was inducted into the Running USA Hall of Fame in 28 and the New Zealand Sports Hall of Fame in 29. Audain — who founded a race in Idaho now the largest road race for women and children — bemoans the loss of the competitive side of road racing. “In the ’8s there was a huge professional circuit with runners coming from all over the world,” she says. If corporate sponsors can be found, Audain would willingly lead another road-racing revolution for the next generation.