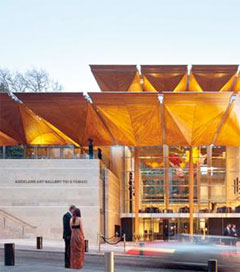 Auckland Art Gallery Toi o Tamaki has won the coveted World Building of the Year Award at the 2013 World Architecture Festival (WAF) in Singapore. Designed by Sydney-based Francis-Jones Morehen Thorp, in partnership with Auckland-based Archimedia, the design was described by the WAF judges as giving the extension “a new architectural identity”.

The winning building’s defining feature is a series of fine “tree-like” canopies that according to the WAF website “cover the entry forecourt, atrium and gallery areas”.

“These light, profiled forms are inspired by the adjacent canopy of pohutukawa trees and ‘hover’ over the stone walls and terraces that reinterpret the natural topography of the site,” the WAF site said.

The gallery also received the “Culture” category win for interior design at the INSIDE Festival – a partner event to the festival.

Auckland Mayor Len Brown said the awards recognised the gallery’s status as a national icon for the arts.

“It also acknowledges Auckland’s vision for the gallery; the exceptional work of the architects, designers and gallery team involved; and the support of the Auckland arts community.”

The nine-year building redevelopment was completed in 2011.