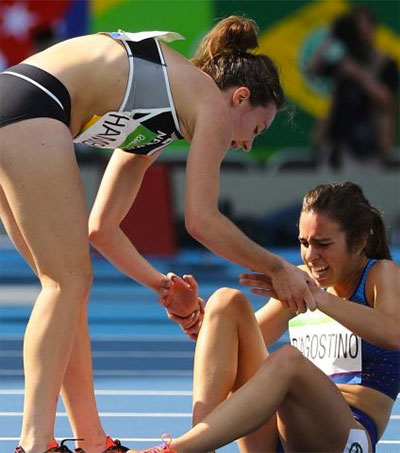 Astounding Act of Sportsmanship in Rio

New Zealander Nikki Hamblin, 28, and American Abbey D’Agostino, 24, set a high bar at the Summer Olympics in Rio de Janeiro, not for winning gold medals but for their touching acts of compassion, Dahleen Glanton writes in an opinion piece for the Chicago Tribune.

“For anyone who hasn’t heard the story, Hamblin and D’Agostino collided on the track during the 5000m race. About two-thirds through the competition, the women fell to the ground. And in an astounding act of sportsmanship, they picked each other up and urged each other on to the finish line,” Glanton writes.

“Winning wasn’t foremost on their mind at that moment. Helping a fellow human being was.

“In the angry, insensitive times we live in today, it was nice to see such a selfless act. But how many of us would have done the same?

“Given the long hours and dogged training these athletes go through just to make it to the Olympics, it would be easy to understand if Hamblin had just stepped over D’Agostino on the track and kept going toward the finish. In fact, in such a fierce competition, it would have been expected.

“These two women set out to win a gold medal. But they are going home with a bond that likely will last much longer than that brief moment on the track. And in the process, they showed the world what it means to be better than regular.

“Our greatest performance doesn’t always have to occur in the classroom, in the office or during the biggest sporting event of our lives. Sometimes we are at our best when we put our own goals aside and help someone else reach theirs.”

The International Fair Play Committee awarded the pair the Rio 2016 Fair Play Award which honours remarkable acts living up to its ideals.