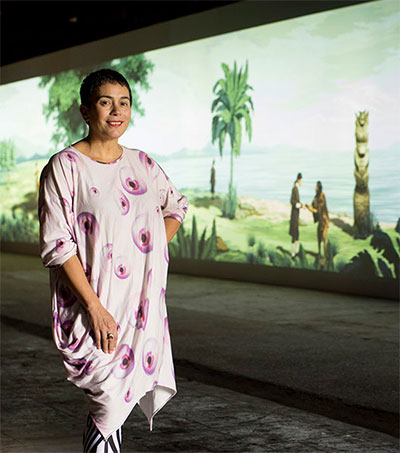 The New Zealand pavilion at the Venice Art Biennale has opened with Auckland-born artist Lisa Reihana and Governor-General Dame Patsy Reddy arriving in Venice’s largest gondola to the historic naval warehouse the pavilion will occupy for the next six months, Dionne Christian writes for the New Zealand Herald.

Reminiscent of a waka, the Disdotona was rowed through the waters of the Arsenale, once a vast shipyard, by 18 rowers from the Canottieri Querini Rowing Club. They were applauded by some 200 onlookers including La Biennale di Venezia president Paolo Baratta, New Zealand’s ambassador to Italy Patrick Rata and a 120-strong contingent of New Zealanders who make up a patrons’ group.

The group helped fundraise to get Reihana’s work, Emissaries, to the Venice Biennale, which started in 1895 and is sometimes dubbed the Olympics of the art world. Biennale Arte 2017 includes more than 200 events and exhibitions by artists from some 80 countries and is expected to attract half a million visitors.

Emissaries, a panoramic video almost 10 years in the making, has already clocked up a number of firsts for New Zealand. It is the first time we’ve occupied a position in the Arsenale, one of two central exhibition spaces, and the first time a Governor-General has attended an opening ceremony.

Using digital technology, Reihana animated the French scenic wallpaper Les Sauvages De La Mer Pacifique, created in 1804 and also known as Captain Cook’s voyages, from a Pacific point of view. She included the sights and sounds of performances, cultural ceremonies and encounters between British navigators, astronomers, ordinary sailors and artists and peoples from across New Zealand and the Pacific.

Reihana added scenes, including dancers and weavers from the Aboriginal Koomurri community, and new sound effects such as the winding of the original clock used on Captain Cook’s voyages to the Pacific and rare recordings of puoro (Maori instruments). Cook’s death features as a dramatic moment of “rupture” in the video.

“For me, it was important to recognise Aboriginal experiences. When you think about it, Australia was one of the first land masses in this part of the world to be settled while we in New Zealand were one of the last so there’s a circularity there.”