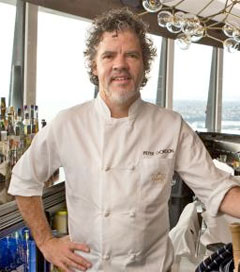 New Zealand chef, London-based Peter Gordon, “the godfather of fusion cooking,” is the inspiration behind recipes recommended in an Irish Times article, which include a frittata topped with Greek yoghurt and sumac. “Gordon really did embrace [fusion cooking] quite enthusiastically back in the 1990s and I remember dining on delicious and elegant, yet quite robust dishes in his Sugar Club restaurant, once upon a time,” Domini Kemp writes.

“Despite many poor attempts to recreate his dishes, chefs sometimes succeeded, and the fusion movement really kick-started trends to push the boundaries with combinations of ingredients. Nowadays, chefs are highly globalised, with an added touch of xenophobia. These days, we’re all focused on local, and in some ways fusion food sounds dated. But Gordon makes the point that without fusion (or should he really be saying globalisation) the Italians would not have had polenta, as corn and maize originated in South America; Thai cuisine would not have had coriander, which originated in the Mediterranean, and as for us and the spuds?

“Regardless of whether or not one thinks that fusion is just fiddling with the classics, Peter Gordon’s has some absolutely fabulous combinations in his books.”

Gordon’s fine-dining restaurant The Sugar Club – the fourth incarnation of the original, which began in 1986 on Wellington’s Vivian Street – officially opened on the Sky Tower’s 53rd floor in Auckland on 2 August. “It’s the best view from any kitchen from anywhere I’ve been in the world,” Gordon says.