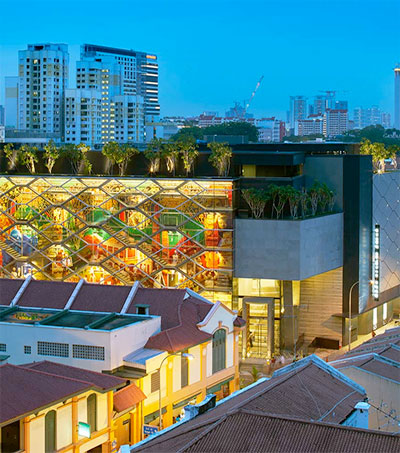 New Zealand-born Greg Shand’s design for the newly opened Indian Heritage Centre has finally given Singapore’s ethnic Indian community a worthy home in which to showcase its cultural riches.

The choice of the Japan-trained, Singapore-based Shand may not have been an obvious one for this project, but it has certainly paid dividends for the sensitive perspective and physical rendition of a culture that is almost 5000 years old.

The brief, says Shand, was to embrace the vibrant streetscape of Little India and its people.

“Considering the diversity and multifaceted nature of the Singapore Indian community, we intentionally limited any direct references to traditional Indian architecture and art,” Shand says.

Here, the solution was the trellis of balconies and exposed staircases fronting the building’s exterior that is based on the geometry of the baoli – a traditional Indian stepped well that is an important source of water and meeting point for Indian communities – and the peekaboo jali screen commonly found in Indian and Islamic architecture.

In keeping with the chaotic vibrancy of the neighbourhood, the colourful mural backing the trellis – currently, a splashy coloured collage of archival images of shophouses – will be changed regularly. This, he says, ensures the building is never static.

Greg Shand Architects was established in 2005.