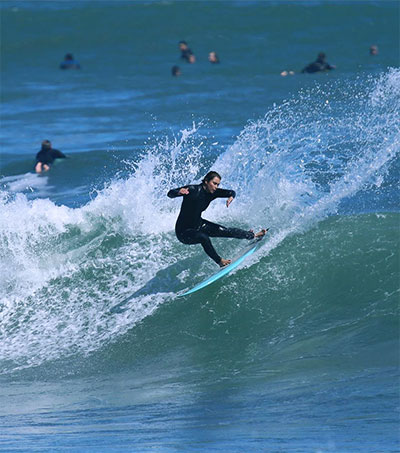 Though movements to boost women’s participation in surfing are taking off in the Pacific region, New Zealand mother-of-two Kelly Murphy remembers the challenges she faced as a teenager trying to make a career out of the sport. Marian Faa reports for ABC News.

“The way you looked in a bikini, that was often more important than your ability,” Murphy (pictured) said.

Fellow New Zealander Danielle Clayton said many women felt intimidated when they were starting out.

In 2018, Murphy and Clayton gathered a group of women together for a weekend of surfing on the coast of Ahipara in Northland. That was when the idea to establish the Aotearoa Women’s Surfing Association was born, Faa writes for ABC.

Clayton said the group aimed to carve out a safe space for women to enjoy the sport.

“Rather than criticise or take part in negative blaming around how we were being represented, we thought, ‘let’s get out there and open up some constructive conversations’,” she said.

The group now has almost 300 members across New Zealand.