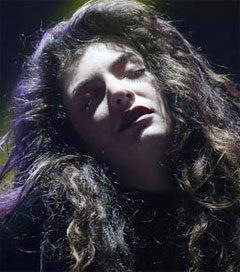 The “unflappable” Lorde, 16, “hypnotises” at her first concert in the United States introducing “her collection of immaculately drawn pop compositions with a confidence and demeanour well beyond her years”, Billboard’s Jason Lipshutz writes in a live review of the show.

“‘Pretty soon, I’ll be getting on my first plane,’ goes the opening of the second verse in ‘Tennis Court,’ Lorde’s biting ode to the trappings of fame. When [Lorde] slowly delivered the line midway through her performance at New York’s Le Poisson Rouge on 6 August, her audience emitted a knowing cheer; after all, the show marked the New Zealand native’s first-ever stateside performance.

“Throughout the set, which drew from her ‘The Love Club’ EP and introduced a handful of new songs, Lorde staggered across the stage, fluttered her hands toward the ceiling during melismas and made ‘sleepy-eyed smirk’ look like a trademarked expression. Her songwriting required such an affected persona – Lorde’s music resembles Fiona Apple’s oeuvre much more than her bubblegum peers – and with her well-defined stage presence, it was easy to forget that the audience was watching an artist who couldn’t get a driver’s license in some states.

“Lorde is an incredibly savvy performer with a deep collection of songs in her pocket. Now that she’s gotten off of her first plane, America better watch out.”