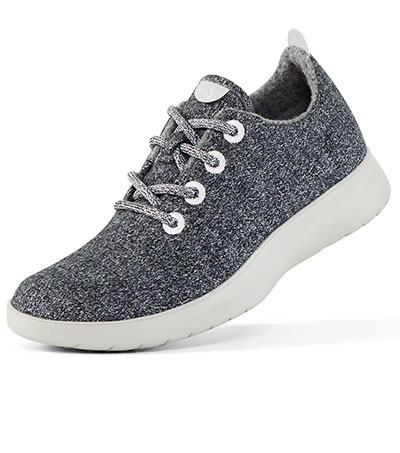 AllBird’s new Wool Runners are the brainchild of Tim Brown, 35, a native New Zealander and former All White. And according to WIRED magazine – which rates the sneaker 9/10 – they are “understated”, “damn good looking,” and “cozy and supportive enough to wear all day.”

WIRED says: “The shoes are made in New Zealand using ultra-fine merino wool and a rubber-foam polymer sole. Also, castor beans. No, really, castor beans. The simple shoes come in a handful of colours (charcoal, green, navy, light blue, and red), but they aren’t trying to compete with the neon-lined displays at Foot Locker.

“No, AllBirds has a higher goal: create shoes with a super-low carbon footprint, right down to the box, in which each single shoe is housed in its own separate compartment, a design that uses far less cardboard to ship them.

“After his athletic career, Brown attended [the London School of Economics]. When his Kickstarter campaign for the shoes exceeded his expectations, he teamed up with San Francisco Bay Area entrepreneur Joey Zwillinger. Together they launched AllBirds, which launched its consumer-reafy product this month. The US$95 kicks come with a 30-day trial but – spoiler alert – you’re not going to need it.”

Brown was one of seven foundation players of the Wellington Phoenix who were signed in 2007 for its inaugural season in the A-League.