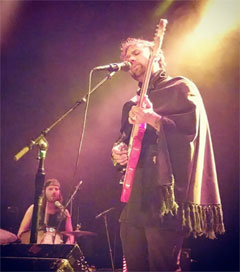 “The Portland-based (though one-third New Zealand-born) trio [Unknown Mortal Orchestra] finds a delicate balance between lo-fi minimalism and swirly, disoriented pop songs heavy on themes of isolation, which they translate gracefully into a live show,” Emily Turner, of The Bay Bridged, writes in a review of the band’s recent San Francisco show at The Fillmore.

“The ability for ominous lighting and a rather prolific fog machine at The Fillmore does in their favour – in comparison to the more stripped-down atmosphere of Phono del Sol last year – as they played a haunting, 90-minute set before an intimate crowd.

“For a three-piece, UMO’s sound is deceptively labyrinthine – yet maintains the calm, quivering minimalism they’re known for. This band’s unique and immersive presence is addictive.”

Unknown Mortal Orchestra was formed by vocalist Ruban Nielson (pictured forefront), formerly of The Mint Chicks in 2010. The band plays The Mohawk in Austin, Texas on 2 October ahead of a full North American tour.