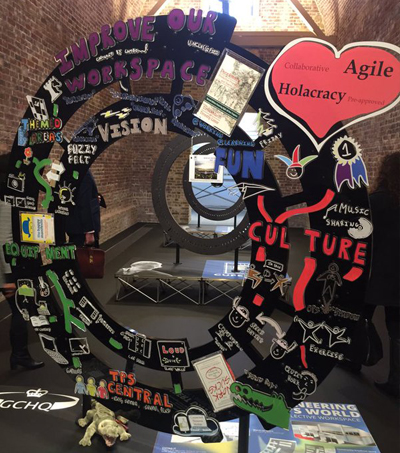 More recently the New Zealander opened an exhibition at the Serpentine Sackler Gallery, Products for Organising, which according to the article in Ocula “looks at the visual cultures of both global corporate organisations and hacktivist movements.”

When asked about his Secret Power project he said: “When I looked through the Snowden files I was strongly affected by the artwork that framed and shaped this information. I wanted to know what kind of figure would be producing this work, including the context and lineage of its production.”

In his current Serpentine exhibition Products for Organising he focuses less on specific geo-political issues and more on the aesthetics of contemporary tech movements by juxtaposing both highly organised companies and corporations and the more loosely aggregated hacker communities. He came up with the idea following his Secret Power project.

“I saw this world of surveillance and resistance as a continuum rather than separate and opposed areas. (…) I thought visualising and exploring this pluralistic view of culture was what I wanted to do. I wanted to put hacktivists alongside hackathons to say: look, these practices and conventions are being leveraged for corporate innovation at the same time as they are being used for politically focused oppositional action. These ‘products for organising’ are really making a new world with new values based on a kind of radical liberalism and complex risk-taking,” said Denny.

When Ocula asked him about building a narrative or symbolic structure that perpetuates both novelty and value within the market in connection to the process of developing something new and transformative (in tech terms), the artist highlighted the importance of storytelling.

“Stories are very important. This is as true in marketing and raising capital as it is in art exhibitions.”

“Some media formats deeply reflect a self-consciousness of the market and marketing pop-psychology/infotainment. Others offer truly independent critical thinking about complex issues. I’m an autodidact like many artists and rely on journalism to understand the world,” said Denny.

He said that ultimately, he was “interested in reflecting a wide spectrum of different frameworks of media and knowledge.”