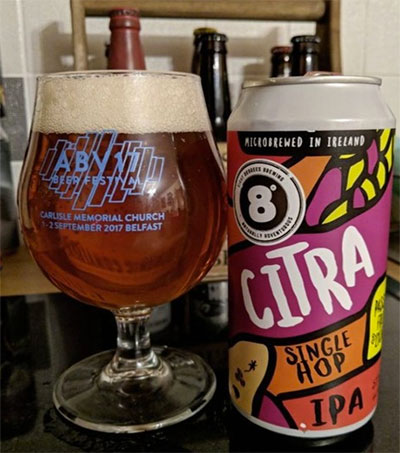 “If you were to run a poll about Ireland’s best loved New Zealander, there’s no doubt that a certain Mr J Schmidt would enjoy a greater landslide than a Russian election victory,” according to Paul McConville writing for The Irish News. “However, the Kiwi influence in Irish life extends beyond the rugby pitch, with antipodean hands all over the beer scene here too.”

“It’s not just hops from the other side of the globe that are making their way into our ales, there’s also a fair bit of brewing expertise from the Southern Hemisphere,” McConville writes. “Take Eight Degrees Brewing in Mitchelstown, Co Cork. Founded by New Zealander Scott Baigent and Australian Cameron Wallace, [the pair have been] at the forefront of the Irish beer scene for some time, but just recently became fully paid up members of the canning revolution.

“Many Irish brewers have switched to canning their beer, citing freshness and ease of storage as some of the reasons, so when 8 Degrees decided to meddle with metal, it was no surprise to see them embrace their Kiwi influence.

“Neon Velvet is a kiwi and lime infused FPA (a what?). Yep, FPA, or fruity pale ale. It comes in a bright 440ml can and is 5 per cent abv. There’s a fair bit of haze going on once you pour this amber-coloured beer into a glass and you’ll get some lovely fruity aromas, provided the beer is served at the recommended 8 degrees.

“The flavours are juicy and fruity, with a slight hint of acidity. They’ve used Citra and Amarillo hops in the brew and dry hopped it with New Zealand hops to bring out a fresh, zesty flavour. It’s not overly bitter and has a smooth, silky mouthfeel, due in part to the oats and wheat in the malt bill.

Baigent is a former water engineer. He and Wallace launched Eight Degrees Brewing in 2010.