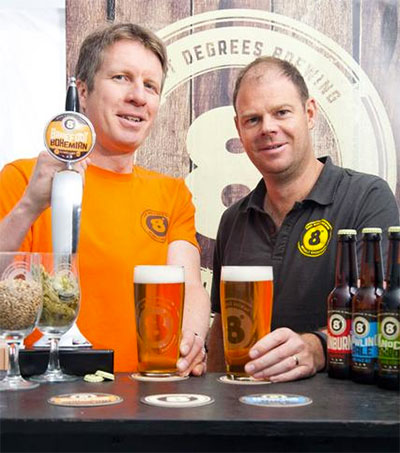 No financial details have been disclosed but industry insiders described it as a “multimillion-euro deal”.

The primary objective of the purchase of the brewer is to ensure a long-term beer supply to sustain the continued growth of Jameson Caskmates, a product introduced by Irish Distillers on a trial basis in 2014.

Caskmates is a variation of the flagship whiskey that is aged in craft beer-seasoned barrels. Sales of the product jumped 110 per cent in volume terms and 103 per cent in the 12 months to June 2017.

Eight Degrees was founded by Baigent and Wallace in Mitchelstown in 2010 and is one of Ireland’s most successful craft beer producers. The company employs 10 people, all of whom are to stay on following the transaction.

The brewer’s brands include Barefoot Bohemian, The Full Irish and Amber Ella.

Under the deal it has agreed with Irish Distillers, the Eight Degrees team will continue to work on new beers.

“When we set up Eight Degrees Brewing in Mitchelstown in 2010 we wanted to brew naturally adventurous, great-tasting beers that were more exciting and innovative than anything else in the market. Becoming part of the Irish Distillers family means that we have the long-term capabilities to continue on this mission as well as being part of the very exciting Jameson Caskmates story,” the founders said in a statement.

Jameson is one of Ireland’s most recognised brands worldwide, enjoying almost 30 years of strong growth with 6.5 million cases sold last year, up from 500,000 cases during the mid-1990s.