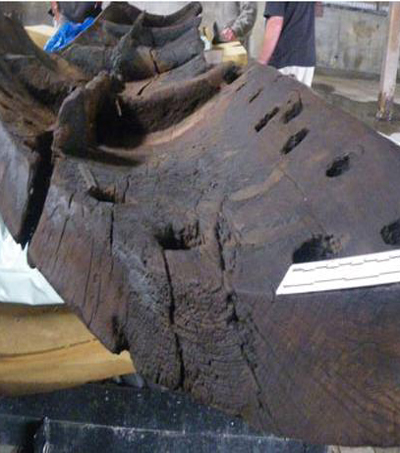 An ancient canoe with a sea turtle carving has survived 600 years in the South Island, creating a scientific stir around the world.

A study of the waka by University of Auckland researchers appeared yesterday in the prestigious US Proceedings of the National Academy of Sciences.

“It was one of those situations where it sort of took your breath away,” said lead author Dilys Amanda Johns, a senior research fellow at the University of Auckland. “I’d never seen anything like it.”

The vessel, described in the Proceedings of the National Academy of Sciences, is one of just two canoes dating back to such an early time period.

A second paper in the same journal finds that shifting ancient wind patterns may have created ideal windows of opportunity for certain generations of sailing Polynesians.”

The preserved canoe remains were discovered in 2011 in Golden Bay. Few such vessels have lasted long enough to be found, because wood is organic matter and decays quickly. But the swampy, oxygen-poor spot it was buried in allowed the canoe to survive the centuries, researchers said.

Using radiocarbon dating, the team found that the canoe was last caulked about AD 1400. The canoe, was probably at least 45.9 feet long when it was whole, Johns said.

The 19.95-foot-long section of hull is part of what the authors call a “complex and robust composite canoe, carved from a single timber.”

The image of a sea turtle is carved into the hull – a symbol that’s rarely found in the Maori culture of New Zealand but that featured widely in art, myths and ritual throughout Polynesia.

“A sea turtle on a 600-[year]-old Polynesian canoe is a unique and powerful symbol,” the study authors wrote.

The study provides fascinating insight and researchers believe it may shed some light on early Polynesians’ sailing technology.

“We’re going to have to discuss, clearly,” said Johns, who said she welcomed other study’s insights. “We think Polynesians  were really good sailors…we think they were able to sail down here with or without help.”