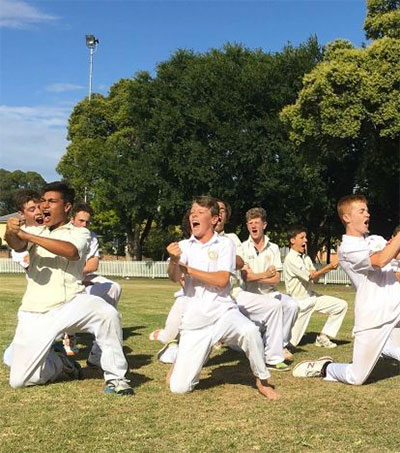 Under-15 Cricket Team Breaks with Tradition

Molong’s picturesque pitch, with its white picket fence and grove of trees, is a long way from the packed rugby stadiums of Eden Park, ANZ Stadium or Ellis Park where the haka is more usually seen.

But for these students, performing the traditional Maori war cry in front of several dozen spectators at a country cricket ground has no less significance.

Their unconventional use of the haka has given these teenagers a boost and attracted curious country residents to see a rare performance with ancient symbolism.

Coach of the Wakatipu cricket team, Russell Mawhinney, said the team’s decision to do the haka during its Australian tour came almost by accident.

“When we got the invite to play in the carnival – and we’re the first overseas team – I made a flippant comment, ‘Oh you probably want us to do the haka’ and it’s grown legs from there,” Mawhinney said.

Teenager Xavier Sadler, from the Ngapuhi tribe, almost lost his voice after leading his team in the haka before every match over the week.

“It’s to frighten the opposition and see if we could put a bit of fear into them.”