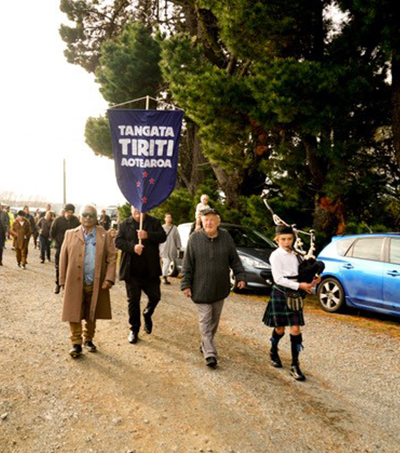 In late June 2022 I joined many other New Zealanders in celebrating Matariki. Maori-led and defined Matariki has emerged as our first recognised indigenous holiday, or if you prefer holy day, seeing that it pertains to metaphysical concepts. It also has secular dimensions in terms of the practical wellbeing of the water, land, and people.

Here at Waiohiki we had a marae-based event focused on whanau and non-commercial fun activities. My Pakeha friends at Te Awanga decided that cucumber sandwiches shared with the extended family at afternoon tea were the order of the day. Whatever, the message that Matariki is a time for quiet reflection on the past and emotional and spiritual preparation for the year ahead has been well received and widely practiced.

I thought ‘How wonderful. We are coming together as a nation’. We of Tangata Tiriti are learning to collaborate and to ‘stand upright’ in Aotearoa. As the poet Alan Curnow put it

Not I, some child born in a marvellous year,

Will learn the trick of standing upright here

With a skip of the heart, I imagined that ‘marvellous year’ is here. Whoa Neddy! Not so fast. The pushback against Matariki, slow to start, has begun to increase in incidence and volume. So too the illogical railing against ‘Three Waters’ which has become a code word for opposition to the sort of co-governance implicit in Te Tiriti. In a Listener editorial (August 6th 2022) “Divided We Fail”, written by Anna Curnow, Deputy Mayor of Kaipara, Northland NZ, who records her experience in explaining to citizens the logic for the “Three Waters” reforms. Anna wrote

“The conversation trots along happily until I mention Taumata Arowai – the new name for our independent water services regulator – or “Te Mana o Te Wai”, or having iwi/hapu representation on regional representation groups. At that point I’ve had people shouting at me about Maori taking over our water assets. To be fair, the government has perhaps been naïve in how deep the racial divide still is”.

Yes, that deep racial divide. To get a good perspective on our social and racial topography its useful to step away and look at ourselves from abroad. Prior to Matariki, bored at an airport, I picked up a copy of the Spectator, Australia. The editorial of June 14th 2022, in a general rant about NZ’s socialist Labour Govt pushing the agendas of identity and race politics, and somehow mixing this with climate change, had this to say:

“The New Zealand Labour government has created two classes of citizen based on genetics and elevated iwi rights above others”.

They also want to tackle our simmering national identity debate head-on. The party wants a referendum on co-governance. They also want the country to decide (rather than have it quietly imposed on us) whether we want to be two distinct camps of tangata whenua and tangata tiriti or all just Kiwis.

Not to be outdone, at the NZ First conference held in mid-October 2022 Winston Peters cranked up the hyperbole Winston Peters accusing the Labour government saying it is pursuing “woke, virtue signalling madness”, and a “separatist agenda”. He says the government’s agenda is driven by “malignant paternalism” and “inverse racism.”

The good old “Iwi or Kiwi?” binary division, the ‘Cartesian duality’. Dame Ann Salmond describes this as a “Classic Cartesian device – anachronistic, divisive, colonial throwback’. I’m not buying it. I look for a reciprocal, mutually respectful relationship between the mana whenua and those of us whose roots arise from different whenua. I’m proud to be Tangata Tiriti, no Aotearoa

A final word or two. ‘Kiwi Keith” Holyoake reckoned that whakapapa would eventually resolve the conceptual binary divide. Keith didn’t quite put it like that, referring rather to ‘miscegenation’ and the solution to our racial issues being found in the “bedrooms of the nation.” Cheer up!