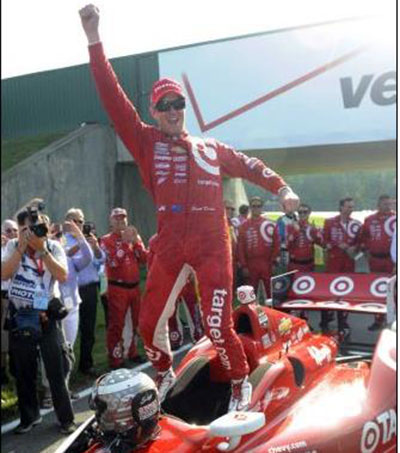 New Zealand racer Scott Dixon went from last in qualifying to capture his fifth win at Mid-Ohio in the last eight years.

Dixon coasted in on low fuel Sunday to finally end his team’s victory drought in 2014.

“To come from last to even a top-10 here was going to be extremely difficult to do,” he said. “But we laid down some quick laps, passed some people and then hung on.”

“(Starting) 17th to (finishing) third sounds impressive until you talk about Scott,” Hinchcliffe joked. “He’s got to go and showboat, like he always does here.”

Dixon led a total of 45 laps, winning the strategy battle against the top contenders while capturing his 34th series win and first since Houston last October.

Almost immediately after getting the checkered flag, just after going past pit row, Dixon pulled quickly over into the grass near the first turn and pumped his fist to fans.

Dixon was not out of gas, but it was a close call.

“The (low) fuel light came up with about a lap and a half to go,” he said. “If you were listening to the radio, you would have heard a lot of random chatter. We conserved for most of the last lap. The way our year has gone, it’s a wonder I didn’t run out and have to walk back.”

It was the farthest back a winner had started since Max Papis won at Laguna Seca in 2001.

Dixon has won like this before, having started 23rd in 2001 at Nazareth, where he came all the way through the field to win.