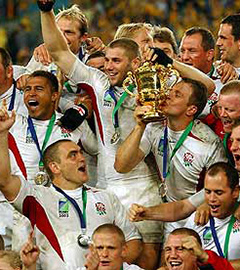 If it was anyone else saying it – a froth-filled Stephen Jones broadside, perhaps – Kiwis would ignore it. But Sir Ian McGeechan, the decorated Scotsman, respected Lions player and venerated coach, is a different matter. And McGeechan thinks England can take the All Blacks on their forthcoming tour.

“Of course, it’s crazy that they cannot field a full-strength side in the first Test [at Eden Park on 7 June] because of the Aviva Premiership final the weekend before – but I do think that they could sneak one of the other two Tests they play against the All Blacks,” he writes in the Daily Telegraph.

“I am not saying that England [is] the finished article just yet, but that very fact must be a little bit frightening for everyone else,” McGeechan continues.

The last time England won a test in New Zealand was in 2003 and the Red Roses went on to win the Rugby World Cup, a point not lost on McGeechan. The solitary other win on New Zealand soil was in 1973, when the Poms boasted legendary hard nuts like prop Fran Cotton and lock Bill Beaumont.

“If they went to New Zealand now and won, with over a year to go [to the 2015 Rugby World Cup held in England] …it might be even more impressive,” says McGeechan. “This team is probably only 75% of where it would expect to be in 12 months’ time.”

The way McGeechan tells it, this England side is packed with players of world class qualities to rival yesteryear’s Cotton, locks Martin Johnson and Beaumont and open-side flanker, Peter Winterbottom.

“That pack is now as good as anything around,” he says. “Alex Corbisiero, Dan Cole and Billy Vunipola are all waiting to return. There is some real depth there. Joe Launchbury and Courtney Lawes have formed a remarkable partnership in the second row [and] I think they are going to be one of the best partnerships in world rugby.

“England have a collective resilience now … in attack, as well as defence.”