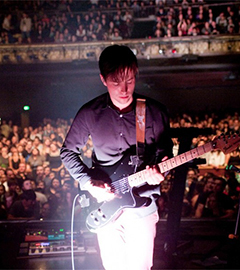 If artists get a chance to leave New Zealand, says Thom Powers, co-founder of The Naked and Famous (TNF), then they must seize the opportunity. Los Angeles-based Powers is in the US with TNF and told local blog Denver Westword that international opportunities for Kiwi artists are rare.

“It’s incredibly expensive to leave and just difficult to connect with the rest of the world from New Zealand,” he says. “We’re definitely not going to return to New Zealand – and I feel bad saying that because I feel like it might sound like it’s insulting to New Zealand.

“But if you have the opportunity to leave the country as a creative person, you just have to take it and not let go,” Powers continues. “We have no intention of letting go of this.”

For the past year, TNF have been based at Echo Park, Los Angeles, where they recorded their second album, In Rolling Waves, which was produced by Alan Moulder, who has previously worked with Nine Inch Nails and the Foo Fighters.

The album is getting solidly positive reviews, particularly for its European pop vibe and three-dimensional electronic textures.

Powers says the new album was a big step up from their first DIY bedroom recordings, which resulted in the domestic No 1 seller, Passive Me, Aggressive You.

“Even if you don’t exactly adopt a love for a lot of the music, I think just the legacy that’s behind it is something that’s quite unavoidable.”