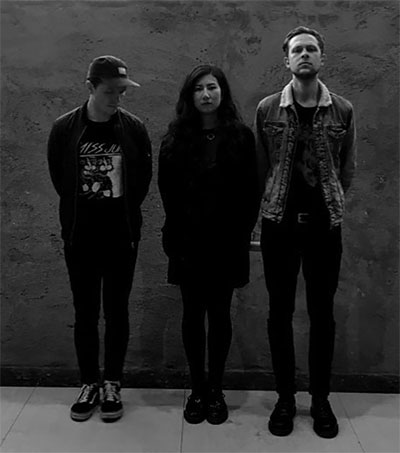 “There are few record labels out there that have come to define an entire country’s quality independent music output. Flying Nun Records did that for New Zealand,” Adam McKinney writes for Washington-based entertainment newspaper Weekly Volcano. Auckland trio Wax Chattels has recently signed with Flying Nun, and is embarking on a tour of the US. McKinney reviews their debut self-titled LP.

“On their eponymous [album], they pursue stark, monochromatic post-punk with a kind of manic fervour. They boast using no guitars to aid their goal of assaultive noise-rock, much like Queen once advertising that their album contained no synthesizers,” McKinney writes.

“Adding to the minimalist streak running through this music is the fact that Leggett is working with a two-piece drum-set, removing the balancing nuance that exists in the rhythm sections of other bands. Lead single ‘In My Mouth’ is said to be an ode to the band’s favourite bar, and it carries with it a verve and energy that isn’t always present in their music. With this song, it’s not so much that you can picture yourself dancing, but you can imagine convulsing to its insistent beat and rave-up madness; even then, there is a prolonged mid-song detour that detonates every bit of momentum the song had going, plunging the proceedings into a sludgy maelstrom, and building the tune back up before collapsing out of exhaustion. A night on the town is not a safe place to be, when Wax Chattels is providing the soundtrack.

“Do you like living in the shadows for any period of time? Are your eardrums insured? Wax Chattels may be up your alley.”

Flying Nun has gifted hundreds of master tapes to the Alexander Turnbull Library collection, which included artists such as The Chills, Bailter Space and The Expendables.