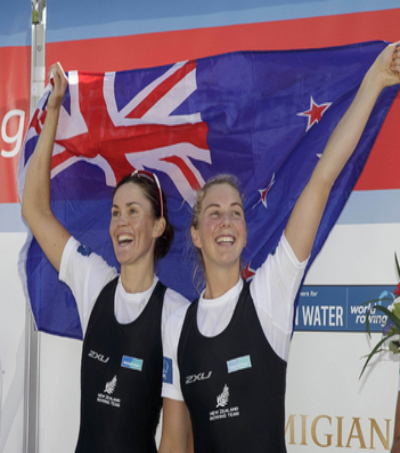 It is the largest number of gold medals New Zealand have won at a world championship, and makes it New Zealand’s most successful campaign.

At the 2010 championships on Lake Karapiro, New Zealand won 10 medals, but only three were gold.

In 2011 it was four golds, a silver and four bronze, but this year is a far better return than last, when just one gold, three silver and a bronze were won.

Bourke and Stevenson turned in a splendid performance to put behind them the memory of finishing second a year ago, with a withering surge over the last 500m.

They were third at that point before easing past the Polish and Australian combinations, winning in 6min 38.04s, 1.32s ahead of the Poles.

Twigg whooped in delight at her gold, having finished with bronze and silver medals at the last three worlds.

She bossed her duel with Australian defending champion Kim Crow, and had a margin of almost three seconds at the line.

The win has special significance for Twigg, who is stepping aside from rowing for the next 10 months to do academic studies in Europe.

She’ll then have to win her seat back ahead of the countdown to the Rio Olympics in 2016.

New Zealand’s other golds were won by Eric Murray and Hamish Bond, who added the coxed pair with Caleb Shepherd to their now expected coxless pair crown; Julia Edward and Sophie MacKenzie in the lightweight women’s double, and the women’s four in the non-Olympic event.