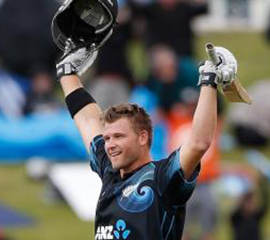 Black Cap Corey Anderson is only 23-years old and nearly a millionaire. Indian Premier League side Mumbai Indians paid $866,000 for the young all-rounder, who set the cricketing world alight with the fastest one-day century in history off only 36 balls against the West Indies.

“It felt like a little game you might play with your mates – then you have to pinch yourself and realise that it’s real money they’re throwing around.

“It hasn’t sunk in yet,” Anderson added. “It’s a life-changing event and pretty exciting.”

The Mumbai Indians outbid interest from the Rajasthan Royals, Delhi Daredevils and Sunrisers Hyderabad for Anderson’s services, underlining the fact that the young man is perhaps the hottest new property in the short form of the game.

National captain Brendan McCullum was the next highest paid New Zealander: $627,000 to join the Chennai Superkings, while Ross Taylor, in a rich vein of form, went to the Daredevils for $390,000, where he will be able to keep an eye on Jimmy Neesham, also to Delhi.