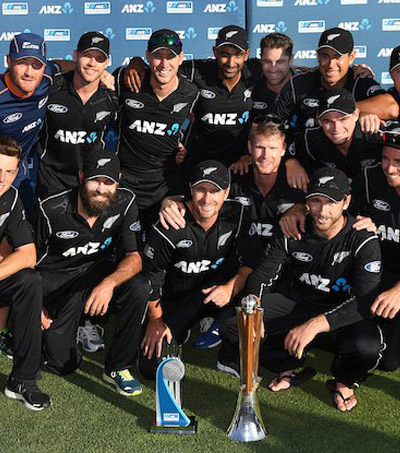 Australia have relinquished the Chappell-Hadlee Trophy and potentially the No 1 ODI ranking, with Mitchell Starc unable to save his batsmen’s blushes in a dramatic 24-run defeat to New Zealand in Hamilton, Pat Cummins reported for the Australian Associated Press.

Starc finished 29 not out as Australia were rolled for 257, suffering a 2-0 series loss after Trent Boult claimed career-best figures of 6-33 in front of a sold-out crowd at Seddon Park.

“It was brilliant, on that surface, his ability to rotate the strike. Him being the constant through that innings is always important,” Williamson said.

Speaking to Stuff, Australian captain Aaron Finch described Boult as “fantastic” as Australia were dismissed for 257 at the end of the 47th over.

“He’s a world-class bowler. He gets it to hold up on that wicket, some were going away off the seam and he has the ability to bowl beautiful inswing,” Finch said.

The 2-0 ODI series loss means South Africa have the chance to grab top spot on the International Cricket Council’s one-day charts if they complete a 5-0 series victory over Sri Lanka. The Proteas currently lead 3-0 following a seven-wicket triumph in Johannesburg on 4 February.