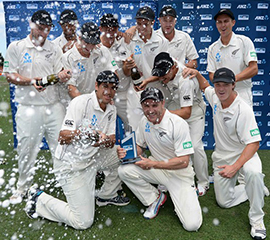 Black Caps on the Rise

What a summer. Three test victories, two test series wins and a 4-0 drubbing of the No. 1 ranked one-day side in the world. New Zealand has risen one place to seventh in the world rankings and are close to taking sixth; captain Brendon McCullum is now rated the 12th best test batsman in the world; former captain Ross Taylor has moved up to fifth; Trent Boult and Tim Southee are elevated to the eighth and ninth best bowlers in the world.

When was the last time the Kiwis boasted two top ten bowlers? Bond and Vettori in the early noughties.

Specialist cricket website espncricinfo has been highlighting the turnaround for one of cricket’s least fancied sides, one that threatened in recent years to be mentioned in the same breath as Bangladesh and Zimbabwe. The ignominy.

Andrew Alderson in his piece, Eleven reasons why New Zealand are looking good, highlights McCullum’s leadership as a key reason: “The skipper gelled the operation, a scenario scarcely imaginable a year ago when cricket in New Zealand threatened to implode … You want further proof? How about the queues waiting to get into the ground on the final morning [to see McCullum score 300]. Rare scenes.”

Public support for the team, at a low ebb only 12 months ago, has rallied ahead of the Cricket World Cup, which New Zealand will co-host with Australia.

But it is the resilience in defence that impresses Alderson: “The recovery in the second test from a seemingly insurmountable situation at 94 for 5 to post the team’s highest score, 680-8, represented the finest hour as test batsmen for McCullum and BJ Watling with their world record sixth-wicket stand of 352.”