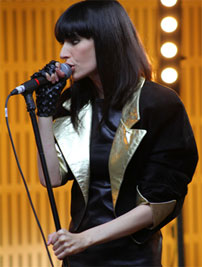 Electro pop star Aucklander Zowie — who opens Katy Perry’s shows in Australia and New Zealand during May — talks to MTV Australia about her idol Michael Jackson and about her debut album set for release in the middle of the year. “Genre wise, ‘Bite Back’ is the first single from it, so there’s a lot of that kind of moody, heavy kind of stuff, and then there’s bursts of punk and then Japanese pop,” Zowie says. “I’m really proud of it, so I hope people like it.” MTV asks: “You’ve got a pretty unique sense of style — who’s your fashion icon?” “People like Michael Jackson, Prince and Grace Jones. Really kind of left-field people, those who, when they came out, people were just like ‘OMG what are they wearing? They’re insane.’ Those kinds of artists really inspire me.”