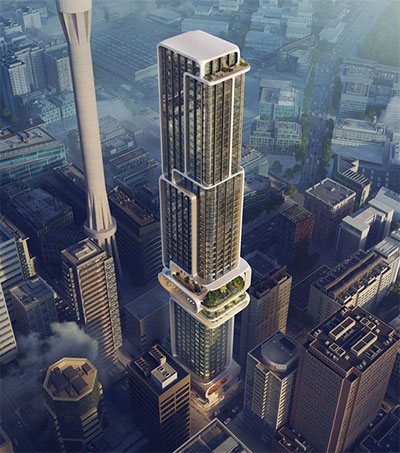 Five competing visions for a landmark new hotel and residential tower on Federal Street in Auckland – including one by UK-based Zaha Hadid Architects (ZHA) – have been unveiled.

The other proposals are by local practice Warren and Mahoney and Australian firms Woods Bagot, Cox Architecture and Elenberg Fraser.

The project for Melbourne-based property developer ICD will see a hotel and apartment block built on a seven-storey car park.

The finalist firms were commissioned to design two versions of the building each, one respecting the city council’s current development framework; the other challenging local regulations with “unparalleled design standards”.

The project, near the Sky City Casino in the city’s major tourist and entertainment district, will be the first development ICD has undertaken in New Zealand.

ICD managing director Michael Mai said: “We’re very excited to be contributing to the fast-growing nature of Auckland city. As ICD’s first international project outside of Australia, we chose Auckland because we see a strong future in continuing to work here. The city has many positive and unique aspects – from its multicultural make-up through to the stunning scenery and landscape.”

ZHA associate director Michele Pasca di Magliano said: “Auckland’s ambition and vision for the future must cater for everyone in the city, and in that respect, mixed-use projects and plenty of publicly accessible spaces will be the most successful.”

If ZHA wins the job it would be its first building in New Zealand. A winner is expected to be announced later this month.