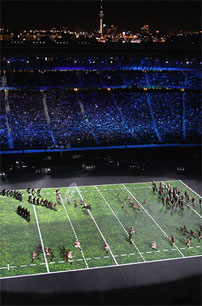 “New Zealand were impressive in spots as they got their Rugby World Cup off to a winning start,” according to the Guardian’s Barry Glendenning who gives an in-depth minute-by-minute analysis of the All Blacks versus Tonga opening match, which the New Zealanders won 41-1. Los Angeles Times’ reporter Pete Kerr described the opening ceremony — broadcast to an estimated worldwide audience of one billion people — as “visually stunning”. “A glittering sea of mobile phones and cameras greeted television viewers around the world as the almost 6,-strong Eden Park crowd lit up the countdown to the start of the festivities,” Kerr wrote, while Glendenning described the first All Black try of the tournament opener between hosts and Tonga: “After taking the ball from Cowan Dan Carter sets off and brings Richard Kahui, Sonny Bill Williams and Ma’a Nonu into play. With a three-man overlap, New Zealand carve open the Tongan defence and full-back Israel Dagg scores in the left corner.” At full time New Zealand “emerged from the game without any injuries, which should keep the demanding Kiwi public off their backs for the time being.”