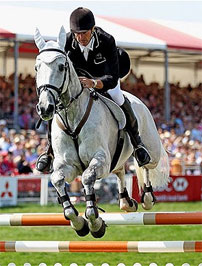 With A Vision For More Gold

New Zealand gold medal eventer Mark Todd, 56, one of only two New Zealanders to compete in six Olympics, says he will ride at his seventh Olympics with a horse “as good as any in the world”. Berkshire-based Todd, riding NZB Land Vision, completed a fourth Badminton victory last year, becoming the oldest winner of the event. And Land Vision would be his preferred mount for the London Games this summer. “If I stay in one piece, all the horse’s programmes will be geared towards the Games,” Todd says. As well as his success at the Olympics and Badminton, Todd has won the Burghley Horse Trials five times and he will be among the favourites for gold at the 2012 Olympics.