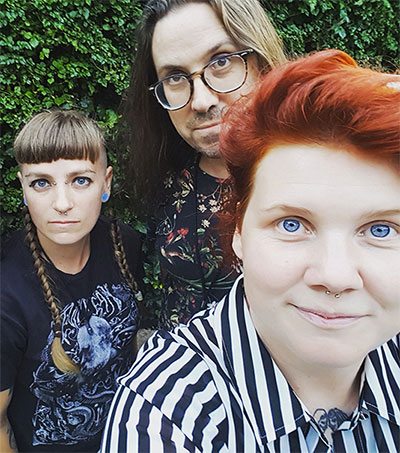 Witch Rockers HEX Are Here to Curse the Patriarchy

Wellington folk metal band HEX have “got the ‘slightly spooky dark rock’ formula down pat, but aren’t afraid to mix it up with a bit of sneering garage rock, down-tempo riot grrrl, or big, fat 70s psych grooves,” Kim Kelly writes for VICE’s music channel Noisey. Their new album, The Hill Temple is “a divine manifestation of feminine rage.”

“The Hill Temple was written and recorded across seven seasons in Jason [Erskine’s] garage in Wellington,” Kiki Van Newtown (pictured right) tells Noisey. “We wanted to create a big, muscular sound that would deliver intense and emotionally complex and layered ideas like axe blows.

“We focused on listening, absorbing the sound, and making changes instinctively, guided by the maxim ‘how would a woman do this?’ The album is full of imperfections. It’s raw and human to us,” Van Newtown says.

“The Hill Temple is a ceremony and a therapy session. It is destroying billboards and working in a community garden and holding your friends and crying. But mainly it is about gathering up your feminine rage and using it as your power.”

The band is on tour in the United States in March performing first at Tribal Cafe in Los Angeles, California on 2 March.