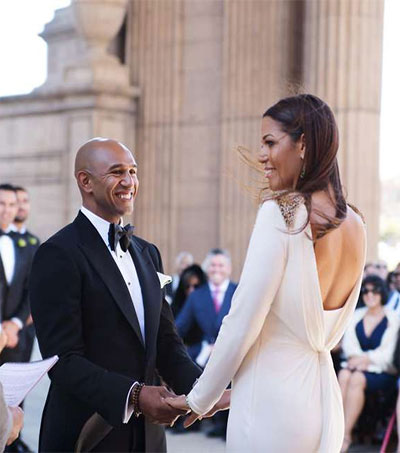 “McBride was not looking for a husband when she joined Match.com back in 2011, yet she was intrigued when she read a headline, ‘Happiness is contagious,’ and was drawn to the positivity in John’s profile,” freelancer Louise Rafkin writes for the Chronicle.

“Positivity was important to her – she’d had to be positive herself, to make it through a bumpy childhood. Born to a mother from New Zealand and an American father, McBride was raised on the South Island. She had last seen her father when she was 6 – the year her mother died and McBride was placed in a supportive foster home on the North Island.

“But when she was 12, she got a call she never expected. It was her father, then very ill, with important information: McBride had a half-sister. It was his dying wish that the two be united, but he didn’t know where McBride’s sister lived. ‘Find her,’ he told her, dying not long after the call.

“After five years of searching, in 1999 McBride finally met Robin, her half-sister who had grown up on the California coast in Monterey. Over the next few years, the sisters developed a deep bond, finding out how much they had in common. In 2010, their shared love of vineyards propelled them to start a craft winery together. Their brand, which spans both their homelands, falls under the McBride Sisters banner: Eco.love Wines uses grapes from New Zealand, and Truvée Wines sources from the Central Coast of California.

“And the highlight of the day? The positive energy, of course. ‘So many people who played an integral part in our lives were together,’ McBride said. ‘The next morning when I woke up I wanted to do it all again – minus the expense.’”