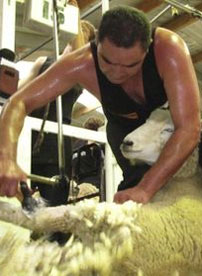 The 4600 sheep picked for the 2012 World Sheep Shearing Competition in Masterton, and the national Golden Shears championships, were pampered this week, with top clippers from around the globe competing for a top prize of $3,000. New Zealanders Cam Ferguson and John Kirkpatrick won the world teams machine shearing final, retaining the title won by Ferguson and teammate David Fagan last year in Wales. Joanne Kumeroa and Joel Henare won the woolhandling title. The return of the biennial event to New Zealand for the first time since 1996 is seen as a homecoming by the sheepshearing community. “People here say the Golden Shears is the Wimbledon of sheep shearing,” media officer at Shearing Sports New Zealand Doug Laing said.