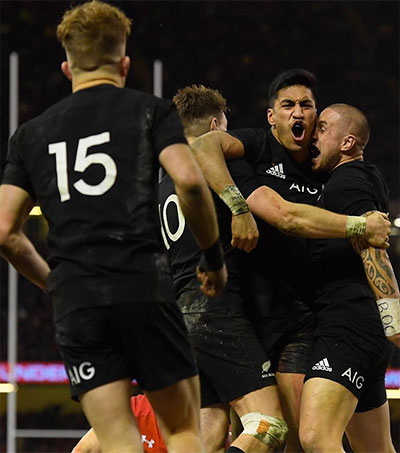 “There was little solace to be found around the streets of Cardiff as the city’s population set about anaesthetising painful memories of yet another valiant loss to the All Blacks,” Irish Independent sports reporter Mike Cleary writes about New Zealand’s 33-18 win in the final match of the team’s 2017 Vista Northern Tour.

“All that pluck, all that fizzing spirit, all that skittish running and probing came to naught as New Zealand showed their class to come through a testing challenge with a brace of tries apiece for wings Rieko Ioane and Waisake Naholo,” Cleary writes.

“So cancel that wake. Put away the black armbands. Reports of the demise of New Zealand rugby have been greatly exaggerated. Once again the All Blacks absorbed punishment to strike hard with two tries within five minutes midway through the second half, rounding off in some style, Ioane getting his second when New Zealand were reduced to 14 men with captain Sam Whitelock in the sin-bin.

“New Zealand may have been filleted by injury but history was against Wales.

“In Ioane and Naholo, they have finishers of true potency as the All Blacks showed when hitting straight back from Wales’ early lead. There is no margin for error against the world champions, as their opening try illustrated.

“A flicker of hope was extinguished when Ioane showed what a world-class talent he is when cutting a lovely wide arc round from a scrum to touch down. It was a suitably splendid sign-off by the All Blacks.”