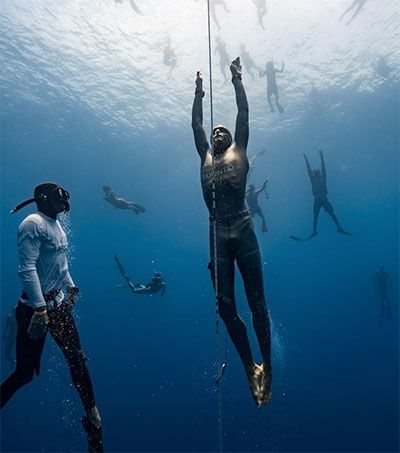 “After Vertical Blue this year I locked myself in my house for six weeks and wrote all day to finish the text for the deadline. I’ll be posting mini-extracts from it in the lead-up to the launch in November.”

“New Zealander William Trubridge has reached depths never thought possible on the precipice of low oxygen. In a sport where failure usually means blacking out, it is a freediver’s daily life to contend with hypoxia, suffocation, narcosis, hallucination, lactic acidosis, hypercapnia, compressed lungs, and immense watercolumn pressure – all while diving into depths of ink-black ocean.

“Exquisitely written, Oxygen is a mind-altering and immersive coming-of-age story about a boy who grew up on a sailing boat, with the sea his classroom and playground. It is about fighting the trappings of life on land, and pushing the limits of human physiology, to become the world’s greatest freediver.”

In 2010, Trubridge became the first free diver ever to reach 91.4m with a single breath in the discipline of constant weight no fins.