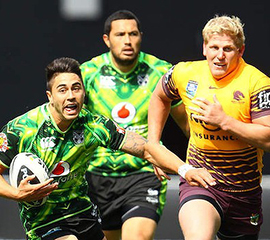 Every year it’s the same: this time could be the season when the New Zealand Warriors finally deliver on all their promise. The world’s toughest league competition, the NRL, kicks off on Thursday, with the Warrior’s season starting against little-fancied Paramatta at Pirtek Stadium in Sydney – and the Sydney Morning Herald fancies the Kiwi team’s chances.

“Judging by the Warriors’ pre-season form, they mean business this time around,” writes SMH league reporter, Michael Chammas following the Auckland-based side’s demolition of the Brisbane Broncos 48-4 in a trial game at Dunedin at the weekend.

“They have got plenty of size in their forwards but it’s their skill that makes them so hard to contain,” Chammas continues. “For too long the Warriors have been renowned as the NRL’s most inconsistent football team.”

Don’t the fans know it. But there is a real sense of urgency and optimism around the 2014 Warriors, particularly around live-wire halfback Shaun Johnson.

“[Johnson’s] got all the attributes to become the game’s elite play-maker,” says Chammas. “But, like his team, inconsistency is his biggest problem.”

Chammas believes Johnson’s combination with new recruit fullback Sam Tomkins will be critical to their fortunes: “Tomkins was one of the best players in the English Super League and showed glimpses of his brilliance in the Nines [the short form of the game, played at Eden Park last month].

“He’s dynamite in open space but will he be able to weave his magic against far superior defensive structures in the NRL?”

The Warriors’ first home game is against the Dragons at Eden Park in round two on Sunday 16 March.