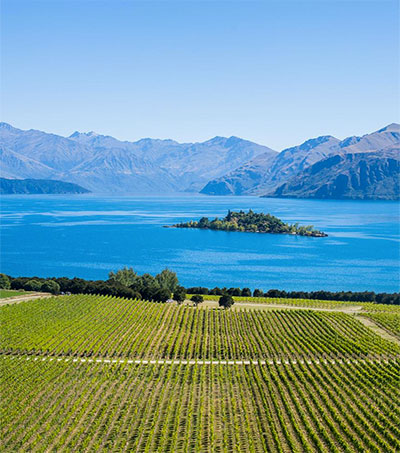 Wanaka Wines That Deliver a Taste of New Zealand

“We’re in the Upper Clutha Basin where even under grey skies the lakes and rivers are an astonishing cerulean blue. Wanaka, the small town at the head of the lake that bears the same name, is set among beautiful mountains,” the Telegraph’s wine correspondent Victoria Moore describes.

“Now a resort that attracts hippies, ski bums, climbers and summer holidaymakers, it has a population of 7000, soaring property prices, and developments at every turn.

“[Winemaker Nick] Mills says: ‘If you’re like us, then you believe that landform informs human culture as much as it does viticulture.” Mills, whose vineyard [Rippon], the closest in Central Otago to the Main Divide, sits more or less at the head of the lake, overlooking the water. ‘The Maoris used this place as a summer camp. The tribes came up here for jade – the local greenstone – and the women and children stayed here, in Wanaka, for rest and education.’

“Rippon enjoys a gentler situation than the vineyards further up the valley, at the other side of the Queensberry Egress, where the climate is more continental (hotter and colder and drier), and its wines are among the best you will find in Central Otago.

“I don’t have room here to explain Nick’s journey into biodynamics, or talk about his international skiing career, suffice to say the family has not exactly rested. Financially speaking, with its heartbreaking views and prime real estate, Rippon would probably realise far more money if it were sold off for houses and hotels, but ‘this land reaches its true potential in viticulture’, as Nick says. Which means that you can literally drink it in.”