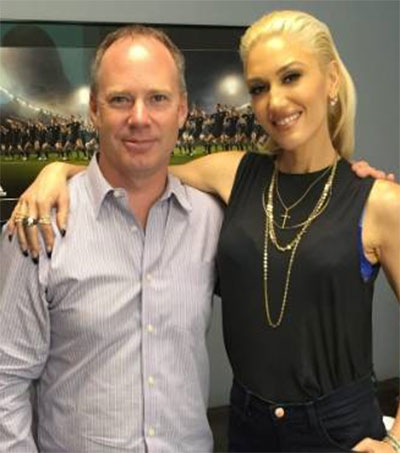 Private shows by the likes of Ed Sheeran and Coldplay are all in a day’s work for Los Angeles based New Zealander Andrew Jeffries, who is executive vice president for programming across the West Coast of the United States.

Jeffries, who is originally from Hunterville, features in Stuff’s regular column, ‘Expat Tales’.

“I started working in radio in Whanganui far too many years ago (around ‘87?) while at Whanganui Boys’ College,” Jeffries says. “I ended up fulltime on air, and moved a few times in New Zealand, including to Dunedin to launch More FM. I left New Zealand in 1997 with my wife Vicky for a one-year world tour (US, Canada, UK, Europe) and stopped in London to earn a few dollars working in a bar like any good Kiwi does … That bored me after three days, so I sent my resume to Capital Radio.

“It must have impressed someone, because I ended up working for them for many years, until changing companies to run the Galaxy Network based out of Yorkshire, before launching Kerrang! Radio UK in the West Midlands, and last stop KISS 100 London. In 2007, iHeartMedia in the USA reached out. The family made the move from the UK to San Francisco and after eight months the call came to move to Los Angeles, where we’ve been for the past 10 years.

“I run all 90-odd stations in my division for iHeartradio.

“Living here, life is excellent. Vicky (from Whanganui), our two boys and I seem to have found our place amongst the 13 million others in our own jandal-wearing way.

“It’s a weird city, unlike any in New Zealand, as it really has no centre. It’s also warm, constantly warm … You can plan a barbecue seven weeks out and know it’ll be fine.

“A few times a year [I return to New Zealand] – love it. New Zealand seems so green. It’s great to slow down a bit, see friends and the coffee in New Zealand is so much better too.”