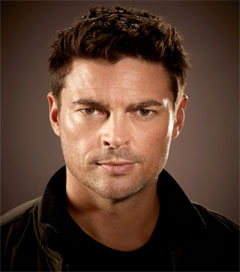 Premiering this month on American channel Fox, the latest show from creator J.H. Wyman and executive producer J.J. Abrams showcases a futuristic world in which, for safety reasons, police officers are paired with robots.

Emerging from a 17-month coma after a deadly attack by a mysterious criminal organization, Kennex is now a little bit synthetic himself (he’s equipped with a bionic leg) but wants nothing to do with his robot partner.

Urban, who starred as Dr “Bones” McCoy in Abrams’ two Star Trek films, is particularly fond of Kennex’s blaster weapon, but while it was bigger than his Star Trek phaser, the Wellington-born actor, 41, said he wasn’t totally pleased with its heft. “I told the props department, ‘I need a more substantial beast than that.’”

Entertainment Weekly’s Jeff Jensen, who reviewed the show, said: “If you’re looking for a hero of the future, look no further than Karl Urban. After all, the thesp has fueled his rising star by playing them.”