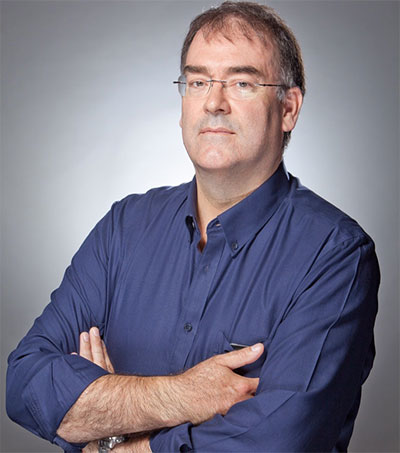 Aitken’s credits included an Academy Award nomination for visual effects for 2009’s District 9, and extensive work on Iron Man 3 in 2013. Infinity War’s directing duo, the Russo brothers, wanted him to capture the barren orange landscape of a once beautiful planet ravaged by overpopulation, a problem motivating Thanos’ quest for the Infinity Stones.

In a bare white room in Atlanta’s Pinewood Studios in 2017, Aitken held in his hands the entire script to Avengers: Infinity War. It was incredibly rare. So rare, some of the movie’s biggest stars, including Robert Downey Jr. and Benedict Cumberbatch, didn’t have it. So rare, a Marvel representative had to supervise him.

Aitken was different. He was the VFX head supervisor of a team specifically brought on to create one of Infinity War’s most pivotal scenes: the one where Thanos battles a hit squad of Marvel superheroes, including Iron Man, Spider-Man and Star-Lord.

Aitken’s desire to see the entire script came down to “context,” he says: “I needed that overall understanding of how the story has to plan out.”

The reason for “incredibly tight” security in the first place involved “a major thing that happens at the end of the film. They wanted to make sure that when people went to see the film, they were able to enjoy that as a fresh experience.”

Aside from script secrecy, Marvel and the Russos brought an “unusual” element to the special effects.

“Sometimes we work on projects where we only ever work through an intermediary,” Aitken says. “There’s always a production-side visual effects supervisor who is kind of like our main point of contact.”

Aitken didn’t do it alone. His team at Weta Digital, the digital visual effects company behind Avatar and The Lord of the Rings based in Wellington, consisted of 400 people, a number that rose to 800 at one time or another. They worked in conjunction with another effects house, Digital Domain – that’s not to mention the other eight effects facilities Marvel employed from London, Vancouver, California and more, to create the movie’s 2800 scenes, essentially all of which contain CGI.