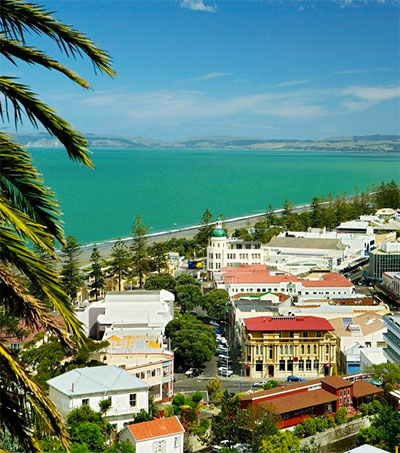 “For Murray Houston, 3 February 1931 started out like any ordinary day. The now 91-year-old New Zealander was sitting inside the small wooden schoolhouse he attended in the coastal town of Napier, when the walls began to shake violently, sending textbooks flying and desks crashing to the floor. Only six years old at the time, Houston did the first thing that came to mind – he ran,” he tells Smithsonian.com.

“‘I remember all of us students running from the school like bees out of the hive,’ Houston says. ‘Children were hanging onto the fences. Otherwise they would have fallen over since the ground wouldn’t stop shaking.’

“The Hawke’s Bay earthquake only lasted two-and-a-half minutes, but it became infamous as the deadliest natural disaster in New Zealand, claiming at least 250 lives and measuring 7.8 on the Richter scale. All but a few of Napier’s buildings were completely destroyed by the earthquake and the fires that followed.

“Today, the ramifications of the tragedy are still part of the fabric of this town of 61,500 – but not in the ways one might expect. Visitors can see echoes of the earthquake in both the pastel-coloured Art Deco buildings that line the city’s streets and in the town’s increased footprint – the earthquake pushed the seabed up three to six feet, offering ample space to rebuild. And rebuild Napier did.

“At the time, Napier’s residents just wanted to move on with their lives. Little did the townspeople realise that their reconstruction efforts would result in the highest concentration of Art Deco buildings on Earth, earning it the title of Art Deco Capital of the World.”