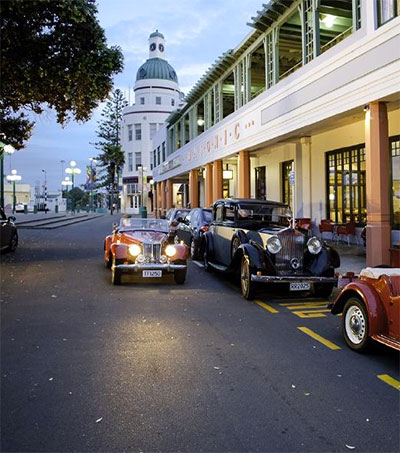 Napier an Art Deco Delight of Design and Dining

The devastating 1931 earthquake is responsible for Napier being reborn as a town of fine designs and dining. The Australian’s Caroline Gladstone pays a visit to explore the best of the city, and its surrounds.

“Earthquakes don’t usually put a place on the map, but it was the devastating shake of 3 February 1931, that saw Napier, on the east coast of the North Island, transformed from a small town with a handful of notable Victorian buildings to the art deco gem it is today,” Gladstone writes.

“Napier is said to have the most comprehensive collection of deco buildings in the world. The style was chosen for its look (ziggurats and zigzags are recurring motifs) but also because it was easy to build and its solid block formation was hoped to be disaster-proof.

“Napier goes Gatsby ga-ga in February each year when about 30,000 revellers hit the streets dressed in flapper finery and boaters, blazers and spats during the Art Deco Festival. Next year marks the 30th anniversary (14-18 February).

“The oldest winery in New Zealand lies on the outskirts of Napier on the hills above the city with glorious views over the vines. Mission Estate was established by French Marist missionaries in 1851 who brought vines and set about cultivating sacramental and table wines.

“This is the place to begin a tasting tour of Hawke’s Bay, the second largest winegrowing region in the country (after Marlborough) and renowned for merlot cabernet blends, syrah and chardonnay.”