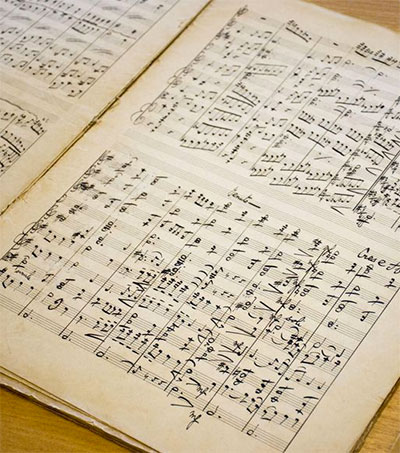 No one is sure how the handwritten scores of English composer Gustav Holst ended up in the archives of Tauranga’s Bay of Plenty Symphonia, Jason Daley writes for the Smithsonian magazine.

A couple of years ago, director of the Bay of Plenty Symphonia Justus Rozemond, and librarian Gloria Pheasant were cleaning out the orchestra’s archives when they came across two handwritten manuscripts. The faded sheets were signed by no other than Holst, best known as the composer of the seven-movement orchestral suite, The Planet. Last month, experts confirmed the manuscripts were indeed hand-written by Holst, including a piece not seen for more than 100 years.

“We didn’t really believe we were holding genuine Holst manuscripts, but there was just enough of a tingle of excitement not to throw them away,” Rozemond said.

So how did the originals end up in New Zealand? The story isn’t completely squared away, but research suggests the scores were brought to New Zealand by English flautist Stanley Farnsworth, who conducted the orchestra’s predecessor in the 1960s.

“We have no idea how Farnsworth came to have them, or what his connection was with Holst,” orchestra member Bronya Dean said. “It would be great to think that someone who hears this news might know more, and be able to help us complete the puzzle.”

According to Eleanor Ainge Roy at the Guardian, The Bay of Plenty Symphonia is preparing to perform both works early next year. They will also likely send the manuscripts back to England where archivists are keen to give the documents a closer look.

Photo by Bay of Plenty Symphonia.