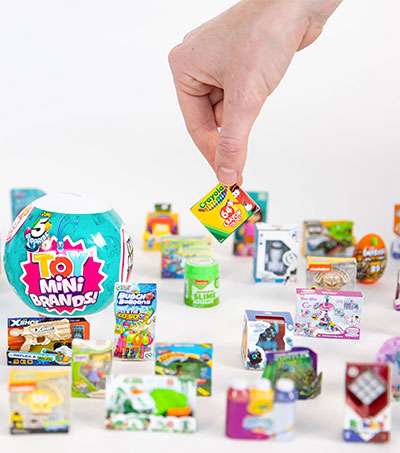 There were sceptics in 2019 when New Zealand-based toy company Zuru unveiled its toy line featuring miniature grocery store items, replicated in exact detail, but shrunk to a tiny fraction of their normal size, senior Forbes contributor Joan Verdon writes. But even as the CNBC anchors were joking, it was obvious Zuru had a hit.

During the first week of November 2019, Zuru sold 200,000 units of the toys at Walmart and Target stores. The hashtag #MiniBrands has also generated over 1.6 billion Tik Tok views, according to Zuru.

To date, the toy maker has sold 140 million miniature versions of supermarket staples. During the peak of the Christmas 2020 holiday season, and during Easter 2021, Mini Brands capsules, which hold five miniature items, were selling at the rate of one every two seconds, Verdon reports.

“It seemed like little miniatures of food items were being made, but no one had really been able to do it on a mass scale,” Cambridge-born Zuru CEO Anna Mowbray said.

The toys have become such a phenomenon that food brands that passed on the licensing request initially have since approached Zuru asking that their products be included in future editions of the toy.